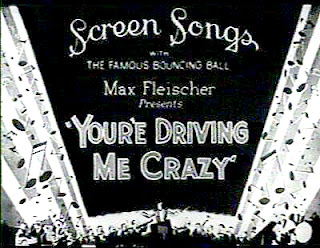 Audiences have always loved a rousing group sing-along. Before 1900 magic lanterns projected glass song slides of lyrics, as charmingly depicted in the vaudeville scene in Mrs. Wiggs of the Cabbage Patch (1934). Everyone sings “In the Shade of the Old Apple Tree” as poor Mrs. Wiggs forgets her troubles. Even villain Charles Middleton joins right in. The shared singing formed an emotional bond in communities through the 1940s that is fondly remembered.

Magic lantern slides moved into picture palaces in the teens, but it remained for cartoon innovator Max Fleischer to reinvent the sing-along on film. Max had made training films during World War I in which he used a pointer to identify equipment. This gave him the “Bouncing Ball” idea. A white ball on the end of a black, hand-held pointer bounces from one word to the next onscreen to help the audience sing in unison.

In 1924 the first “Ko-Ko Song Car-Tune” was a big hit at New York’s Circle Theatre. Ko-Ko the Clown jumped out of the inkwell and ran through a few hijinks before the Bouncing Ball led the song Oh Mabel. Audiences caught on fast and loved it. The theater re-ran the film while Max and Dave ran to make more.

The Fleischers teamed up with sound pioneer Lee DeForest to make the first talking cartoons that even pre-dated Steamboat Willie. In My Old Kentucky Home (1926) Bimbo says to the audience: “Follow the ball and join in everybody.” The Metropolitan Quartet sings while the Ball leads off. Soon the ball is replaced by a cartoon character who dances across the words. In later cartoons the animated words take on a surreal life of their own. For example, the word “watch” might turn into a pocket watch or “faraway” would morph into a chugging train.

The deForest Phonofilms were mostly seen in the chain of 36 theaters owned by The Red Seal Film Corporation, which was partnered with Hugo Riesenfeld, Edwin Miles Fadiman, Dr. Lee deForest, and Max Fleischer. While a few large theaters in major cities had deForest sound equipment as well, these milestones of animation were regarded as a mere novelty. The Song Car-Tunes went out to the rest of the country in separate silent versions to be accompanied by the house organ.

From 1924 to 1927 the Fleischers made 36 Song Car-Tunes with 12 produced in the actual deForest sound on film process. The songs ranged from contemporary tunes such as "Margie," and "When the Midnight Choo-Choo Leaves for Alabam', to old-time favorites like "Has Anybody Here Seen Kelly?," "Comin' Thro the Rye," "My Old Kentucky Home," “Sweet Adeline,” "Come Take a Trip in My Airship," "Oh, How I Hate to Get Up In the Morning," “ By the Light of the Silvery Moon," and “Dixie.” (Many excerpts appear in Ray Pointer's fine documentary Max Fleischer's Famous Ko-Ko Song Car-Tunes. 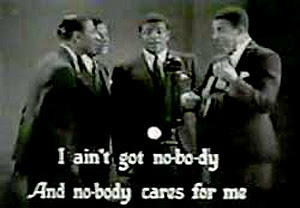 When DeForest went bankrupt, the Fleischers forged ahead with a new series of “Screen Songs with the Famous Bouncing Ball,” turning out 109 between 1929 and 1937. Ko-ko no longer starred, but Betty Boop made guest appearances in six. Popular singers like The Mills Brothers, Rudy Vallee, Ethel Merman, Lillian Roth and the Boswell Sisters appeared in live-action to start the songs.

Jean Shepherd expressed the unique emotional appeal in his collection of stories "In God We Trust, All Others Pay Cash" (1966): "The white ball bounced from word to word as the audience, conditioned by countless hours of Kate Smith, Harry Horlich and the A & P Gypsies, Jessica Dragonette and the Silver Masked Tenor, belted it out. A Depression audience did not mess around. When that bouncing ball bounced, they belted! The empty coal bin and next month's rent forgotten... The only time I ever heard my Old Man sing was when the mighty Wurlitzer, like some demonic pipe of Pan, drove him on."

The Fleischer imagination dimmed by 1935 and the Screen Songs turned routine. Many were set in a theater with rather lame spot gags appearing on the movie screen inside the cartoon. The annoying Wiffle-Piffle character starred in too many. Lesser bands of Shep Field, Henry King and Jack Denny were given more screen time, which was cheaper than animation, and playing with words in the songs was abandoned.

The Bouncing Ball was called into service during World War-II for many live-action Sing-Alongs made just for soldiers fighting overseas. “G.I. Weekly” shorts featured a scantily clad young lady, songs and the Bouncing Ball. The group singing proved to be quite a morale booster. Also the girl. After the war Famous Studios, who had taken over Fleischer, revived the Screen Songs series in color with When G.I. Johnny Comes Home, released Feb. 2, 1945. 39 more were made through 1951. Live-action bands and singers were gone but the delightful animation of words in the last verse returned. 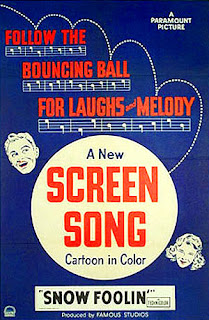