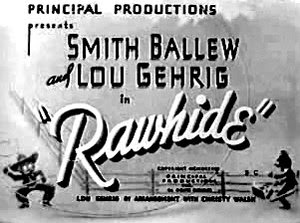 What’s more curious: sports legend Lou Gehrig as a B-movie cowboy star, or that the baseball great also sings in the movie?

Rawhide is an enjoyable little B-movie gem from 1938. For Gehrig’s surprising screen debut he was paired with established singing cowboy sensation Smith Ballew. (Actually, in this one Ballew plays a singing lawyer)

Whoever conceived the idea of convincing Lou Gehrig to act and sing in a B-movie had to know what they were doing. Likely it was entrepreneur and producer Sol Lesser, who had a track record for packaging, producing and promoting big screen concepts.

Lesser first began taking his ideas to the screen in 1915 when he learned of the imminent destruction of San Francisco’s depraved Barbary Coast district. He photographed the events before and after and exploited the film himself to theaters with the title Last Night of the Barbary Coast. He invested the windfall profits into buying up theaters and building his own theater chain. By 1930, B-movie mogul Sol Lesser’s Principal Pictures was producing and distributing a continuing product line of offbeat westerns and high concept features. Lesser and his company produced the post-MGM Johnny Weissmuller incarnations of the Tarzan movies for RKO and subsequent interpretations starring Lex Barker and Gordon Scott. 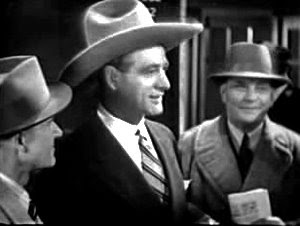 The plot in Rawhide involves Lou Gehrig supposedly retiring from the Yankees, at the peak of his career, to move out west and settle with his sister in a quiet town called Rawhide. The first scene in the picture is in New York’s Grand Central Station where Gehrig is speaking with reporters about his sudden decision to leave sports:

Multiple Reporters: “I'll bet you a new suit of clothes you'll be in Florida for spring practice.” “Aw, just wait till the old season starts.” “You'll miss the crowds and the cheering and the excitement."

Lou: That's just what I want to get away from. I've had all of that. I'm going to wallow in peace and quiet for the rest of my life. I'm going to hang up my spikes for a swell old pair of carpet slippers. 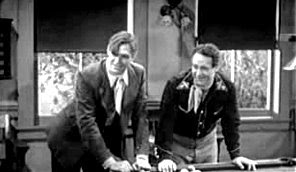 For the next hour we share Gehrig’s Wild West adventures as he and his sister are challenged by ruthless and corrupt members of the “Cattlemen’s Protection Association.” Gehrig survives everything from horseback riding for the first time to a barroom brawl where he pitches billiard balls, Yankees-style, across the room to knock out the bad guys. All this aided only by a new-found singing-cowboy lawyer friend, and a crusty old sidekick named “Pop.”

After all the bad guys are neutralized, and all the songs sung, the finale is inevitable. Pop rushes up to Gehrig, relaxing on the porch, and exclaims:

Pop: Oh, Lou! Lou! Telegram for ya.
Lou: Read it.
Pop: I did.
Lou: Would you mind tellin' a guy?
Pop [reading]: Mr. Lou Gehrig - Rawhide. Your terms are acceptable. Stop. Report at once for spring training.
Lou: Boy, that's what I've been waiting for! 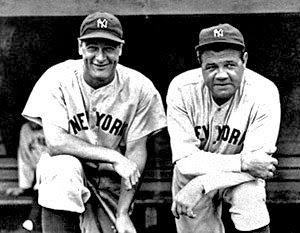 Of course, all singing cowboy movies have happy endings. And back in 1938 when Rawhide was first released, this was truly a happy ending - as movie lovers and sports fans knew Lou Gehrig would soon be back in the park hitting home runs for the Yankees.

However, as most are aware, Lou Gehrig’s life story lacked the kind of happy ending found in his baseball games and his romp as a big screen cowboy star. Evidence of his developing illness began manifesting during the 1938 baseball season - and Gehrig entered the Mayo Clinic on June 13th 1939. Six days later he was diagnosed with Amyoltrophic lateral sclerosis (ALS), a degenerative neurological disorder that would later become known as Lou Gehrig’s Disease. July 4, 1939 was declared “Lou Gehrig Appreciation Day” at Yankee Stadium. That was the day Gehrig made his famous farewell to baseball speech, which included the line: “Today, I consider myself the luckiest man on the face of the earth.” Lou Gehrig died on June 2, 1941. He was 37 years old. 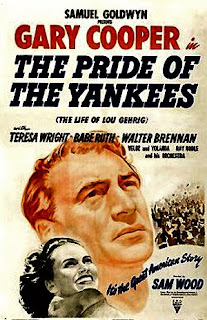 Gary Cooper is superb in his 1942 portrayal of Lou Gehrig in Pride of the Yankees. It’s a dramatic and poignant story of a genuine American sports star and role model. The movie was nominated for 10 Oscars, including Best Picture, Actor, Actress and Original Story and Screenplay.

One patriotic way to spend July 4th “Lou Gehrig Appreciation Day” might be to visit the Official Lou Gehrig Website and then on DVD watch Pride of the Yankees and let Gary Cooper, Teresa Wright, Babe Ruth and Walter Brennan tell you the rest of the story.

Rawhide is available at Movies Unlimited. If you enjoyed co-star Smith Ballew and are hankerin' to see more, Movies Unlimited also has a double-feature of Smith Ballew westerns.
Posted by BijouBob at 5:58 PM
Email ThisBlogThis!Share to TwitterShare to FacebookShare to Pinterest