The Relevancy of Betty Boop 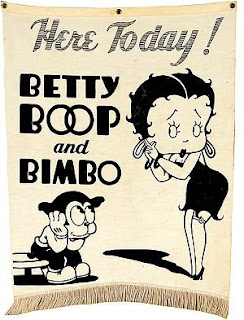 Cartoons, shorts and features of the depression era entertained and inspired a burdened nation, often sending audiences home with the illusion, however brief, that things would work out OK. The exaggerated characters and plots in the Betty Boop cartoons were set in the real world and often satirized real world issues of the day. Many of these issues are just as relevant today.

Betty Boop began her screen career as a sexy, eccentric cartoon character striving to survive and succeed in depression-era America. Betty's uncredited screen debut was in 1930 as an anthropomorphic French Poodle. Her famous hoop earrings originated as floppy dog ears. Following a few make-overs, Betty emerged in 1932 as a full-blown cinema superstar and pop culture icon. 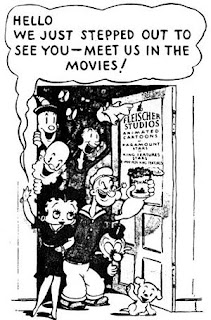 She was adult, adorable and would belt out a catchy song at the drop of a double entendre. With her trademark "Boop-oop-a-doop" Betty won the hearts of movie-goers at a time when many struggling souls desperately needed their spirits lifted, if only for a few hours.

Betty's screen persona transitioned from sexy and sassy to sweet and soulful when national censorship laws came in 1934. Under the Hays Code (1930-1968) censors determined what was morally acceptable content on a pass or fail system. Clearly Betty Boop, Mae West and other film franchises had been pushing the envelope, and the resulting movie censorship ironically took root at about the same time as the repeal of prohibition. The Hays Code was replaced in 1968 by our current MPAA letter-based rating system.

When Paramount was put on notice, Betty Boop was simply reinvented by Max Fleischer and his creative team. Her skimpy outfits and overt sexuality were replaced in 1935 by longer skirts and a softened, more sensitive personality. Nonetheless, Betty continued to be America's "Queen of the Animated Screen" until her retirement in 1939. 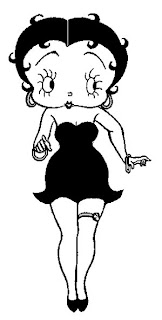 From her debut in 1930 until today, Betty Boop's image remains ubiquitous in American popular culture; on greeting cards, decals, mugs, t-shirts and ceramic sculptures. While most everyone recognizes her, few today know much about Betty and her relevance to motion picture history.

So now, with tongue firmly in-cheek, we present for your amusement and edification eleven of Betty Boop's animated adventures that reflect on contemporary issues like health care, the ailing auto industry, urban renewal, politics, international relations, celebrity icons, out-of-control pets, stock car racing and baby factories. All titles below that are highlighted in gold are live links to where you can watch the cartoon on the Internet Archive or on YouTube. 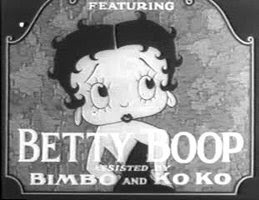 First up for those not already familiar with her early work, Betty Boop's Rise to Fame (1934) will serve to introduce and establish Betty's celebrity credentials.

In this genuine classic, a live-action Max Fleischer interacts with an animated Betty Boop in presenting scenes from three of Betty's popular pre-code cartoons, including her impressions of Fanny Brice and Maurice Chevalier from Stopping the Show, her steamy hula dance from Betty Boop's Bamboo Isle, and her sultry dance with a young Cab Calloway voicing Betty's lustful adversary in The Old Man of the Mountain. 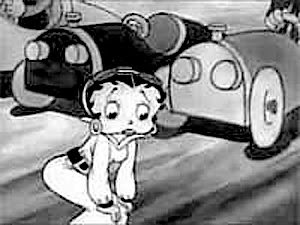 In Betty Boop's Ker-choo (1933), Betty struts her stuff as celebrity queen of the stock car races. Paramount News cameras are on hand to capture the pandemonium, but Betty arrives late with a bad cold and a Diva attitude. She serenades us with a song and the race is on.

Fortunately Betty isn't the mother of the fourteen (at least) babies she tries desperately to care for in On with the New (1938). In this post-code entry, Betty tires of working as a short-order cook and decides to change employment. That is, until tending to a room full of babies in an industrialized nursery proves even more challenging. 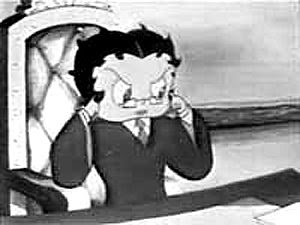 In Judge for a Day (1935) Betty works as a court reporter and on her way to work endures obnoxious and anti-social behavior by those around her. When at work, Betty fantasizes on what she would do if she were judge and jury.

In The Candid Candidate (1937) Betty's Grampy becomes the new Mayor by a one-vote landslide. Urban renewal is parodied with much invention and humor, and with public approval in the end.

International relations take center stage as Ms. Boop blossoms into an international superstar in A Language All My Own (1935). Betty travels to Japan where she is celebrated as would be a pre-war U.S. Ambassador or our new Secretary of State Ms. Clinton. 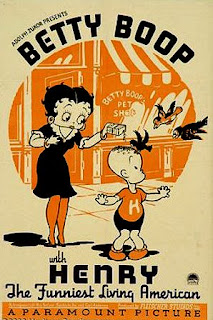 First up is a charming Betty Boop cartoon that introduced an animated version of the King Features cartoon character known as "Henry." In Betty Boop With Henry, the Funniest Living American (1935) Betty enlists Henry to tend her pet shop while she runs an errand. Henry battles with a monkey and the pets are soon out of their cages and out-of-control.

In Be Human (1936) Betty takes on a brutal animal abuser. This one is curious and very disturbing in its extremely violent depictions of animal abuse. Betty enlists help from Grampy, whose solution is justified payback, teaching the abuser the value of being kind to animals.

FDR's New Deal also called for new ideas, and since anyone could have an idea that might make money - Betty, KoKo and Bimbo all show off their crazy concoctions at an invention convention in Betty Boop's Crazy Inventions (1933). 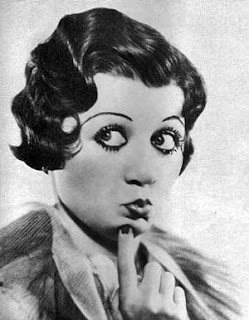 A song Questel sings as the animated Betty in Betty Boop's Crazy Inventions, "Keep a LIttle Song Handy," is reprised by crooner Rudy Vallee in a live-action short subject called The Musical Doctor (1932). Questel plays the live-action nurse Betty Boop to doctor Vallee in a musical hospital where music the prescription for every patient. The song is infectious: "Keep a little song handy, wherever you go, and nothing can ever go wrong (boop oop a doop). Keep a little song handy, and sure as you know, sunshine will follow along. Any little single jingle, that sets the toes a-tingle, is welcome when you mingle, in any single song." 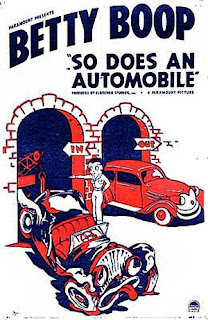 Lastly, here and on the screen below you can enjoy Betty Boop starring in So Does An Automobile (1939). The auto industry is ailing indeed, at least at Betty's Auto Hospital, where Ms Boop provides diagnosis for sick cars, while serenading them into recovery. This is an amusing musical metaphor for our current ailing healthcare and auto industries.

Betty's star shined bright once again on early 1950s television, but dimmed as black and white content transitioned to color.

Betty made her television comeback during the 1980s on PBS, when Betty Boop cartoons were often featured on the original Matinee at the Bijou series. We here at the Bijou considered Betty Boop our unofficial mascot during the PBS years, and look forward to bringing her back once again soon in all her eccentric glory and in pristine HD.

The country could certainly use a Betty Boop stimulus package. The Depression era messages of humor in the face of the bleak reality issues of the day, as reflected in these cartoons, ring true today. Just as sweet and sexy Betty was an inspiration then, she is just the kind of artistic "stimulation" that our national psyche needs today in more ways than one.

Posted by BijouBob at 12:32 PM
Email ThisBlogThis!Share to TwitterShare to FacebookShare to Pinterest