The Three Faces of Tom Keene 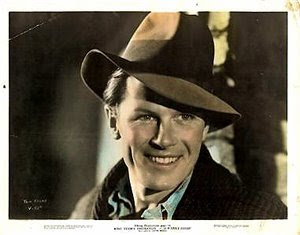 Under the old studio system movie moguls groomed promising new stars by first creating for them a new name. Today we look at the curious screen career of a B-movie star who acted under three different names, but is remembered today mostly for his many roles as cowboy star Tom Keene.

Keene was born in New York state in 1896 and eventually began an acting career in live theater and the movies using his birth name, George Duryea. Following a dozen worthy film roles in Hollywood, RKO Radio Pictures developed Duryea into a popular B-movie cowboy star after first changing his name to Tom Keene. Fifteen years later, when the starring roles stopped coming, Keene changed his name to Richard Powers and continued another fifteen years as a stage, screen and television actor.

In the late 50s, at the end of a fading film career, Powers permitted his once-famous Tom Keene moniker to be used in association with a few films, including a role in what many consider the worst movie ever made -- Plan 9 From Outer Space. According to the Internet Movie Database Duryea/Keene/Powers performed in 113 screen roles, including 86 movies and 27 television shows. 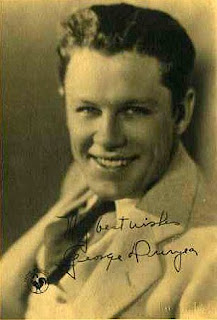 George Duryea's first screen appearance was in 1923 in a one-reel short called The Just A Little Late Club, produced by Better Day Pictures as a "Picturization of a Bruce Barton editorial." Bruce Barton was a pioneer in advertising and public relations who became nationally known as "God's Pitchman" after writing a best-selling book called The Man Nobody Knows. In the book, Barton argues that Jesus Christ was the world's greatest salesman. Producer/Director Cecil B. DeMille admired Barton's book and reportedly considered making it into a movie. While that didn't happen, DeMille did hire Barton as Technical Advisor for his epic production of King of Kings (1927).

George Duryea's association with Bruce Barton likely led to DeMille casting Duryea for the lead role in his production of The Godless Girl (1929). 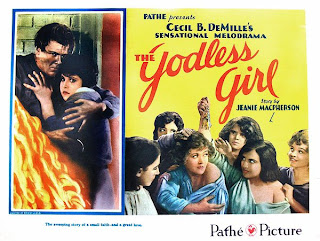 The film is a religious parable with Duryea cast as a Christian student and class-president contending with a determined co-ed (Lina Basquette) bent on promoting atheism on campus and recruiting new members for her "Godless Club." The Godless Girl begins with a written prologue reminiscent of exploitation films like Reefer Madness:

It is not generally known that there are Atheist Societies using the schools of the country as their battleground -- attacking, through the Youth of the Nation, the beliefs that are sacred to most of the people. And no fanatics are so bitter as youthful fanatics.

Keene is seen briefly in a fascinating four-minute clip from The Godless Girl that you can watch here.

Barton and DeMille may also have played a part in Duryea's success in landing a dozen prominent film roles (several with major studios) during his first three years in Hollywood -- and perhaps why many of Duryea's future film roles would be associated with religious and historical themes. His experiences working on The Godless Girl and performances in Tide of Empire (1929) and Tol'able David (1930) paved the way for Duryea's rising star and first Hollywood makeover. 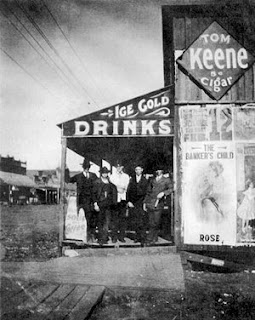 In 1930, RKO decided George Duryea had the rugged good-looks and talent to be cast as the star in a series of westerns they were planning. However, studio heads decided that a more marketable name was needed, and history suggests Duryea's new name "Tom Keene" was inspired by a popular cigar brand of the era. Keene starred in a dozen of these B-westerns for RKO beginning with The Sundown Trail in 1931. 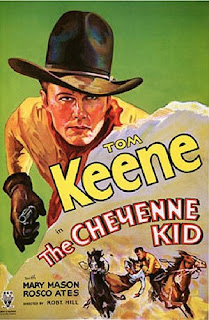 Unfortunately, this first series of Tom Keene westerns, with a few exceptions, proved to be mostly pedestrian and lacked continuity of character. In each episode, Keene played a different role with a different name and wore undistinguishable wardrobes. The only distinction was that in each film Keene buckled his gunbelt in the back rather than the front. RKO discontinued the series in 1933, and it's unclear whether the decision was engineered by RKO or by Keene himself, who may have tired of being typecast in westerns.

Keene was next offered the lead role in director King Vidor's controversial 1934 Depression-era classic Our Daily Bread. While some assailed the films socialistic solutions for surviving the Great Depression, Keene and the film were mostly well-received by audiences and critics; nonetheless the film did poorly at the box office. You can read Victoria Balloon's essay and watch a dramatic scene from Our Daily Bread as part of last week's post. 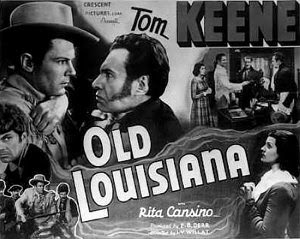 Following Our Daily Bread, Keene performed in a few Paramount westerns before accepting an offer by poverty-row studio Crescent Pictures to star in a series of eight historical dramas based on real-life characters and world events. Mostly well-produced with low budgets, these were not traditional westerns and have titles like Drums of Destiny (1937), Raw Timber (1937), Under Strange Flags (1937), and Old Louisiana (1936), in which he co-starred with Rita Hayworth before the studios changed her name from Rita Cansino. One of the films in this series, The Law Commands (1937) can be watched in its entirety and for free courtesy of the Internet Archive. 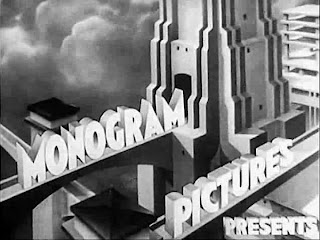 While Tom Keene was busy making the Crescent Pictures series in 1935, Monogram Pictures was losing its identity in a merger with Mascot Pictures and Consolidated Film Industries to form Republic Pictures. Fortunately, about the time Keene was wrapping the Crescent series, Monogram was released from the merger and Monogram Pictures was reborn with much optimism and fanfare. As part of the studio's restart, Keene returned to his former role as a cowboy star in a series of four Tom Keene westerns; God's Country and the Man (1937), Where Trails Divide (1937), Romance of the Rockies ((1937), and The Painted Trail (1938). 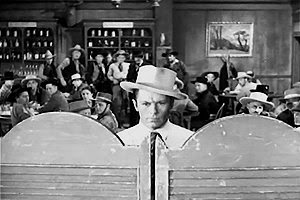 Following the four Monogram westerns, considered by many to be among his finest work, Keene took a two year hiatus from acting, dabbled in real estate, and even made some personal appearances serving as the "Honorary Mayor" of Sherman Oaks, California, in 1939. 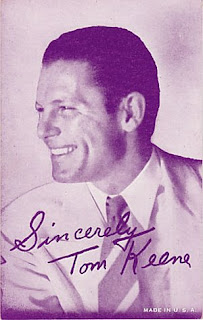 In 1940, Keene returned to Monogram for another round of eight Tom Keene westerns produced and released during 1940-42. This time around Keene's cowboy persona included some continuity of character with frequent sidekicks, wonder horses and gal pals. One in this series, Western Mail (1942) can be seen in its entirety courtesy of Internet Archive.

Ironically, his last film as a certified cowboy star was Monogram's Where Trails End (1942). This second round of Monogram westerns marked the end of Tom Keene's stardom and the beginning of his third makeover under the new stage, screen and television name of Richard Powers. 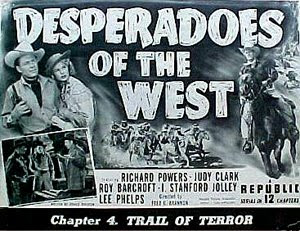 As Richard Powers, Keene had an ambitious, though greatly diminished, third act in show business. He began Act III as a contract player at RKO and appeared in many featured bit roles both as good guys and villains, credited and uncredited. He had small roles in Dick Tracy's Dilemma (1947), Dick Tracy Meets Gruesome (1947), with The Bowery Boys in Dig That Uranium (1955), and many other films. In 1950, as Richard Powers, he starred in Republic Picture's 12-chapter cliffhanger called Desperadoes of the West.

In 1951, Powers took his new name to television and appeared in such popular series as Hopalong Cassidy, The Millionaire, General Electric Theater, The Adventures of Ozzie & Harriet, The Abbott & Costello Show and Death Valley Days. You can watch Richard Powers performing in the TV series Judge Roy Bean (1956) on the Internet Archive. 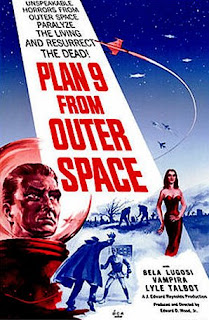 Powers allowed his famous Tom Keene screen name to be used a few times during the Richard Powers years; notably as one of several famous cowboy guest stars in the Roy Rogers film Trail of Robin Hood (1950), in a Dan Rowan and Dick Martin western spoof called Once Upon a Horse (1958), and in his swan-song appearance in what is arguably the worst movie ever committed to celluloid, Plan 9 From Outer Space (1959).
With the tagline "They Came From the Bowels of Hell," it would ironically be a Baptist Church that financed director Ed Wood's Golden Turkey Award winner and Keene's final film, but only after the church convinced Wood to change the film's name from Grave Robbers From Outer Space.

George Duryea, Tom Keene and Richard Powers retired from the screen in 1959 and again dabbled in real estate and insurance until dying of cancer in 1963, leaving behind a widow and stepson.
_____________________
Many of Tom Keene's movies can be seen on Turner Classic Movies and purchased at TCM or Amazon.com. Much more info on this and other popular cowboy stars of classic movies can be found at The Old Corral website.

Posted by BijouBob at 5:33 PM
Email ThisBlogThis!Share to TwitterShare to FacebookShare to Pinterest