From Plato’s Cave to Ike’s Church 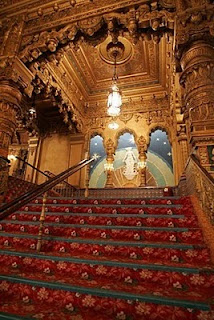 In this digital age, movie fans experience films “on demand.” Watching movies on a phone or a laptop, the world is your Bijou! Still, there’s something to be said for the ornate movie palaces of the 20th century, whose grandly themed interiors were as much a part of “going to the movies” as the films themselves.

It was in this architectural frame of mind that we found a neat little post by Marco Siegel-Acevedo over on his blog The Last Palace. A blogger who explores the different ways modern digital media and communication define the American landscape, Marco reminds us in a very personal way how integral place and setting are to the bijou experience. For some things, there are no substitutes. 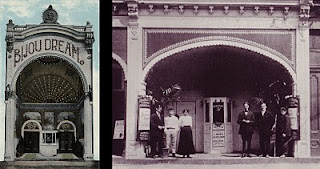 Most of my quasi-religious experiences have happened in movie theaters, not churches. It’s no mystery, really. One sits in the dark, preferably a cavernous space, where one senses the presence of other souls, only you and they are focused on the visions before you, as intimate as dream, or memory. Or, in the case of the popular re-tellings of the Exodus story, as intimate as God speaking to you from out of a Burning Bush. 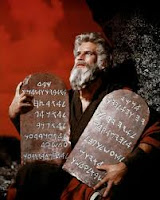 Actually, the first time I heard God at the movies He was awesome and terrifying. It was the late 60s, and my father had taken me to see a holiday revival of De Mille’s The Ten Commandments at the Loews Paradise on the Grand Concourse in the Bronx, one of the five Loews Wonder Theaters in the New York area.

The decor of the place was impossibly lavish, even pagan. It was an “atmospheric” movie palace, meaning that the vast barrel-vault ceiling of the auditorium was designed to imitate the open sky, a deep blue which faded to night when the show started,
tiny electric lights winking on to evoke the stars. The audience of thousands sat in the midst of a ruined Roman villa, its broken columns silhouetted against the artificial twilight along the walls on either side. My dad and I sat in the lower of two balconies piled high above the orchestra seats. After the film was over and the house lights went up, or rather, when the artificial dawn arrived, I looked down over the brass rail on the teeming, milling masses below. It was a sea of people, like De Mille’s Israelites, huddling under the towering walls of water in the cleft of the Red Sea.

That was the point of the Wonder Theaters. You didn't go to the Paradise for Cassavetes’ earthbound human dramas, but for De Mille's spectacle, for Ford's sweeping vistas, even for the tortured camera angles of Hitchcock. You went to have an out-of-body, almost spiritual experience, helped along by the temporal displacement of being in an ancient outdoor ruin, or a pagan temple. The movie palaces of the 1920s were going for the vestigial memories of mankind unreeling their imaginations in ritual spaces, what was known as theater to the ancient Greeks but which still had an odor of burnt offerings. It's no accident that the earliest movie theaters, the nickelodeon arcades and bijous, were essentially magical caves.

In fact, the very history of the 20th Century movie theater resembles a super-compressed history of western religion: the caves and grottos gave way to lavish temples and imperial palaces, which fell into neglect and ruin during the Dark Ages of the Great Depression. Many of the palaces were razed to the ground to make way for purely secular office towers, but a few, including some of New York's Wonder Theaters, survived to become places of Christian worship.

The transcendent sensory experience of early 20th Century American moviegoing found a ready counterpart in the postwar religious revival. Reverend Ike, for instance, purchased the Loew's 175th Street Theater and transformed it into his United Palace Church, keeping this most elaborate of the Wonder Theaters in a state of near perfect preservation. Its gilded interiors are an appropriate setting for exalted states, whether of enthralled movie audiences or ecstatic evangelicals. Today, it is rare to see a movie in such grand surroundings; but I still believe the big screen offers a better chance at epiphany than our home theaters, laptops and iPods, the Lumiere Manifesto notwithstanding.

The second time I heard God at the movies, it was in the featureless black box of a modern multiplex. His voice was gentle and soothing. Once again he called to Moses from the Burning Bush, but this time He was a God of persuasion, not of command. De Mille's blinding atomic bush had become a gently iridescent shrub. "Moses," God whispered, almost inaudible in the desert breezes. And while I don't consider myself a religious person, per se, I wept. Because of the intimacy of scale, it was a powerful little scene in an otherwise run-of-the-mill animated musical (Dreamworks’ The Prince of Egypt): on the big screen, in that dark room, the message is aimed right at you, only at you.

POSTSCRIPT
While researching this post, I found a clip of the scene on YouTube... only to find no trace of the original power. The flame, it seems, burns brightest in the temple.

Thanks to Strange Culture for hosting the Film + Faith Blogathon, November 7-9, 2007.

A special thanks to Marco, for sharing his memories and allowing this reprint.

While each passing year marks the demise of some of America’s movie palace treasures, it also marks some amazing preservation success stories made possible by lovers of film, history, and architecture. Patrick Crowley and Ross Melnick have created a rich catalog of what’s been saved and what’s been lost over at their site, Cinema Treasures. A must see!

We at the Bijou salute these gentlemen and the efforts of all those who endeavor to keep the flame burning and the popcorn popping.
Posted by BijouBob at 5:37 AM
Email ThisBlogThis!Share to TwitterShare to FacebookShare to Pinterest

When I returned to Philadelphia, the local movie palaces were starting to decay. The downtown Mastbaum Theater has since been razed and my local theater, the Logan, still stands. It had been a church. It looks like it is falling down

I have used one of you pictures in my last post, the one which shows the face of Moses, in the movie "Prince of Egypt", and of course I have included a reference pointing to here. Hope you are agree, on the contrary, please tell me and I'll delete it.
See you.