Rich Mendoza, who wrote the theme song for the original Matinee at the Bijou series, still has some very distinct memories of his experiences with Rudy Vallee, the crooner of the tune. Here are some of his thoughts, more than a quarter-century later: 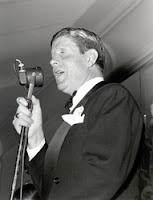 “When I first phoned Rudy to introduce myself, he’d recently been invited OFF a mid-day talk show on WGBH/Boston. He was touring the provinces with his one-man show and the TV appearance was part of his P.R. efforts. The occasion was the 50th anniversary of the first singing telegram, which had been sent to him from Boston to New York. The talk show producers outdid themselves to welcome him. Before bringing him out as a guest they had a small group of dancers and singers perform a medley of some of the songs he made famous, decked out in Yale letter sweaters and carrying megaphones. No doubt Rudy should have been honored, but apparently he was not in a sunny mood. As soon as he was seated the hostess asked “So... how did you come to be identified with the megaphone?” Rudy scowled, then snapped “How come EVERYONE ALWAYS asks me the same STUPID question?” The hostess looked at the camera and ad libbed “We’ll be right back.” After the commercial break, Rudy was gone.

This may have been a lucky break for me and the rest of the Bijou gang, as Rudy was feeling quite sheepish about the whole thing and was as eager and cooperative as I could have ever hoped. A few weeks later, the tracks to “At the Bijou” recorded, I was ready to fly to LA to meet him and record his vocals. In our conversations he’d mentioned that the thing he missed most about NYC was the cheesecake. When I pulled in to Silvertip, high atop Rue De Vallee (known to the hoi polloi as Pyramid Place) to introduce myself in person, I had with me a pineapple cheesecake from Balducci’s that I’d brought across the country with me. He was enormously pleased and thus began a thoroughly enjoyable relationship which lasted until his death in 1986.

He was a world of fun, a gracious host and extremely professional in the recording studio. That’s not to say that I never got to see the legendary Rudy Vallee temper, but his explosions were hardly worth taking personally as they were as short-lived and empty of intent as they were colorful.

Bob Campbell, one of the original Bijou producers, and I were invited to the Vallee manse that week for dinner. After dinner, Rudy honored us with a private performance of his one-man show, in which he reminisced about his fascinating life. This was an extraordinary production as Rudy, busy as a one-armed paperhanger, ran the slide projector, the video playback, the cassette player and the sound system, just as he did when performing the show in public.

Bob, thinking about a future TV project, inquired whether Rudy would be interested in having his life story produced for television. HBO and Showtime were very new networks at the time and did not have a lot of experience yet in creating original content. Perhaps they’d be open to the proposal. Well, the fuse was lit. Rudy, obviously annoyed and getting more so every second, had already given much thought to such a prospect and he made it clear that his life story wouldn’t be on cable, it would be on CBS and Robert Redford would play the lead. (Rudy, to my knowledge, was never accused of having a problem with self-esteem. In fact, his tennis court was on top of a building devoted entirely to a museum to himself. Reportedly, after seeing it, Frank Sinatra quipped: “Gee, I wonder who lives here.”) Bob, trying to dig his way out, but only getting in deeper, offered that the timing might be right for such a project as nostalgia seemed to be experiencing a surge of popularity. “F*** NOSTALGIA!” explained Rudy. “F*** NOSTALGIA!, F*** NOSTALGIA!,“ he continued, further clarifying his earlier point.

While Rudy may not have been particularly frightening when he was angry, he proved to be absolutely terrifying when in a good mood. The next night Bob and I, and Rudy and his wife Eleanor, were going to have dinner at a local Chinese restaurant before heading to the recording studio. Rudy was in high spirits and he insisted we take one of his two Connecticut police wagons to the restaurant, Rudy not only driving, but also being in charge of the lights and sirens. Somehow we survived a journey that at times made Space Mountain seem tame, but Bob remembers vividly drinking in every detail of Los Angeles as it flew by, thinking that he meant to experience life to the fullest if these were to be his last few minutes on earth.

To say that Rudy was the most colorful character I ever met would amount to damning him with faint praise."

Rich Mendoza is currently writing the theme song for the new Matinee at the Bijou, to be performed by Host Debbie Reynolds. Rich is founder of Amazing Tunes. Check back here for more updates as we get closer to hitting the airwaves.
Posted by BijouBob at 11:58 PM
Email ThisBlogThis!Share to TwitterShare to FacebookShare to Pinterest

I was in high school then, and had absolutely no idea that Rudy Vallee sang the theme!

Those lyrics are flooding back to me as though I heard them yesterday, when in reality I probably haven't heard them since about 1982...whenever it was that Scott DaVinti (sp?) left the show's opening, replaced by a vintage projector being threaded to the accompaniment of a jazzy clarinet-led theme.

I'm flattered that you remember my song so well. Since it's been 25 years since you've heard it, I have no problem with you being one word off...DILLINGER was stealing the headlines. We plan to do a post in upcoming weeks in which we'll include the entire lyric. Thanks again!