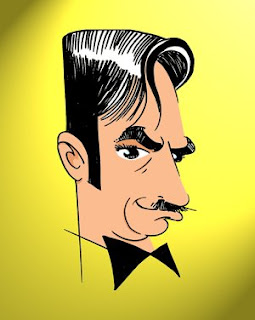 The Bijou is delighted to welcome animator and historian Ray Pointer. Ray is a peerless researcher who has released a series of documentary style DVDs on the pioneers of animation including Blackton, Bray, Fleischer, Disney and more. Ray has an extensive background in animation, film, and video production covering 40 years. He is President and CEO of Inkwell Images. Here he discusses how he got into animation in "Finding Ko-Ko."

My formative years introduced me to the old theatricals that were first sold to television in the 1950s. These cartoons not only captured my attention due to the fascinating animation, but also instilled an interest in drawing that stayed with me the rest of my life. The first of these vintage series I saw was Out of The Inkwell. Although I didn't know who the distinguished gentleman with the Austrian style moustache was at the time, the clever interaction with the live action artist and the black-suited clown with the pointed hat hooked me immediately. Although the sight of over-turned inkbottles and spilled ink shown in these films frightened me, I still continued to appreciate them, but with a cautious aside view.

My search for Ko-Ko began just as I entered Cass Technical High School, where I was enrolled in the Commercial Art program. I spent many hours hand lettering in pen and ink -- this being in the days before it became popularly known as "calligraphy". I came to hate it because by being left-handed, I had to lay everything out in pencil first, then work backward, bottom to top to avoid smearing the ink. This took twice as long to complete assignments compared to right-handers. But the other reason I hated it was that the India ink smelled like rotten eggs. 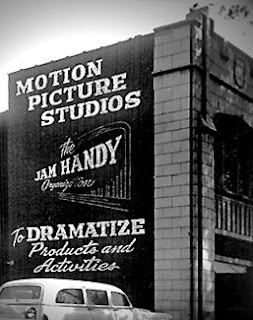 mmer of 1967. The department manager, Bob Kennedy told me the history of the company, including the influence of Max Fleischer there in the 1940s, with references to Fleischer's landmark, Out of The Inkwell. All impressions of splashing, stinking ink aside, the interview progressed to the camera room, where I projected the sample animated cartoons I had brought along. They were finished in full color with sound on tape that worked in synchronization with the projector.

Within a few minutes, I had an audience of the entire department standing at the back of the room, all laughing, cheering, and applauding at what they saw. As the lights came on, I was introduced to a short elderly gentleman, Max Fleischer -- the Inkwell Man! Max had apparently stopped in to visit old friends -- what timing! Imagine the very source of my interest saw my first efforts, and recommended me for my first job! The impression of those twenty minutes has stayed with me all my life, and while I worked there, I started gathering anecdotes about Max Fleischer that had never been published before, realizing that this was a fantastic subject for a documentary.

It was now 1970, and I was a freshman in the Film and Television Production Program at Wayne State University in Detroit. After my schedule of classes, I went to the main Detroit Public Library and searched through the copyright records for a list of Out of The Inkwell titles. By all accounts, there were about 65 films made during the pre-Paramount period 1919 to 1927. The next step was to find prints.

The search begins: The Museum of Modern Art in New York led me to the Willoughby-Peerless Camera Stores in 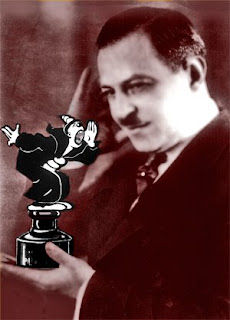 New York, which once carried 16mm prints of Out of The Inkwell, but their supplier had gone out of business with no forwarding address. Then I contacted the Bray Studios and discovered that they did have a number of their old cartoons available in 16mm, including some 10 Out of The Inkwell films made between 1919 and 1921. Naturally, I wanted to buy them all. I ordered two, "The Clown's Pup" (1919) and "Automobile Ride" (1921). I waited about two months, and then received a polite letter explaining that there were problems with these old negatives. I accepted prints of The Chinaman and The Tantalizing Fly as substitutes. I wanted to buy more, but the negatives already were deteriorating. At least, this was a start. 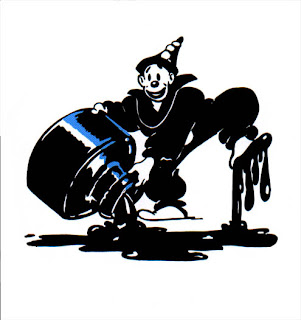 ext I combed through the film rental catalogs, and discovered a number of Ko-Ko titles in the Audio Cinema library in Chicago. These were the 1950 Stuart Productions television releases with music tracks added by Winston Sharples. Over successive weekends, I rented these reels just to see the cartoons and continue my research. I soon discovered certain 16mm libraries that sold prints mostly from the 16mm Kodascope versions made for home exhibition in the 1930s. Having viewed these few films from 1919 to 1925, I made a discovery. There were three different clowns!

The mistaken idea has been that the character was always Ko-Ko The Clown. But in the beginning, the clown was known as nothing more than "The Fleischer Clown" or just "The Clown". He was a literal tracing off live action that tended to be blocky with a small head, and was Fleischer's first character from 1919 to 1921.

Read the rest of Ray's fascinating story: "Finding Ko-Ko."
Posted by BijouBob at 1:22 PM
Email ThisBlogThis!Share to TwitterShare to FacebookShare to Pinterest