Ray Pointer To The Rescue 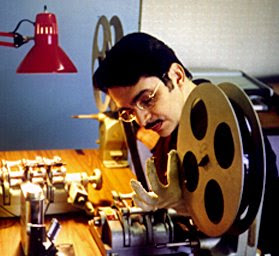 This week the Bijou has been applauding the work of master animator and historian Ray Pointer for the many cartoon treasures he has reconstructed for the entire world to appreciate and enjoy. After watching the five cartoon gems Ray provided for this week's Bijou Mini-Matinee (see below), we had a few questions.

Ray, it's striking that at the same time in the mid 1920s Max Fleischer and Walt Disney were each producing their own unique cartoon series of live-action mixed with animation characters. Was this the start of the Fleischer-Disney rivalry we've heard about?

It is quite apparent that Disney was aware of these combinations of animation and live action, particularly as used in Fleischer's Out of the Inkwell series, which was essentially 3/4 live action with animation inserts integrated with the illusion of interfacing with reality. Disney's concept was the reversal, placing a live action figure into a cartoon environment. The idea of it being a little girl's fantasy was very ambitious and more technically challenging.

Since his pilot film, Alice's Wonderland, was made in 1923, it would seem that Disney's inspiration was certainly due to Out of the Inkwell, but his motivation was really out of a search for a new novelty rather than a calculated plan to compete with Max Fleischer. The assumed "rivalry" came later based on Disney's desire to advance compounded by his tendency to lure away Max Fleischer's animators in order to learn the secrets to Fleischer's methods as he continued building his own. For decades people have presented a twisted concept that Fleischer was in competition with Disney. This is not accurate since Fleischer had been established a decade before Disney. This concept of "competition" was based on the place both men had in the field as prominent producers. Fleischer was an established presence while Disney was up and coming. Walt eventually surpassed Max because he was driven to succeed, and his visions were more far reaching.

Just how many hats did Max Fleischer wear in the creation of his works? 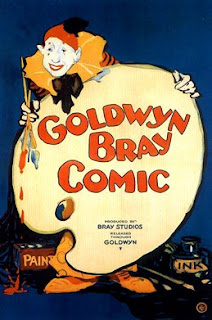 In the beginning, Max came up with the concepts. At The Bray Studios, he and Roland "Doc" Crandall animated the cartoons, which they were able to produce in a month. This was largely due to the fact that they were mostly live action. Max came up with the story outlines. His concepts were thematic such as "The Clown's Pup," "Ouija Board," "Automobile Ride," "Modeling," etc. Dave Fleischer was not as active in the production of the cartoons at Bray other than acting as the clown for Rotoscoping. When Max left Bray in 1921, Dave came in to learn the business and find his niche. By 1923, when Dick Huemer came in as the Fleischers' lead animator, the nature of the humor changed due to the influence and pairing of Dick with Dave. This is indicated in the titles which also designate the point when the clown was named KO-KO. Previous to this, the character had no name. Pun titles resulted like "KoKo's Kink," "Ko-Ko's Queen," "Ko-Ko Nuts," etc. Max was not as active in the animation by this time, but did contribute occasionally. By this time they started building a staff based on the installation of the In-betweening method of production where assistants did the intermediate drawings to complete the action for the scenes. Art Davis, who later went on to animate and direct for Warner Brothers, was assigned as Huemer's assistant and become the industry's first "In-betweener." This was a very efficient method of production which was eventually adapted by the entire industry.

Did Disney both write and animate the quite sophisticated story for "Alice's Egg Plant?"

By this time, Walt had a staff of animators. Alice's Egg Plant was animated by Ubbe Iwerks, "Ham" Hamilton, and Thurston Harper. Walt was the producer/director and devised most of the stories, including this one. It is curious since rarely did his cartoons reflect political statements. In this case, Alice's Egg Plant suggests Disney's feeling that organized labor was the result of Communist Agitators -- an issue that he came to face 20 years later.

Felix the Cat was the greatest cartoon star of the 1920s. Can you tell us his story? 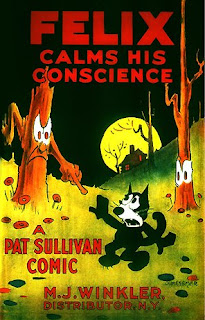 For decades Felix has been cited as the first personality character of animated cartoons. But he followed Mutt and Jeff by three years. In the silent era the most important cartoon short subjects were Felix the Cat, Out of the Inkwell, and Mutt and Jeff. While Pat Sullivan created Felix, it was the imagination of Otto Messmer that really made him the first major cartoon star of the cinema. Felix debuted as an installment in the Paramount Screen Magazine Newsreel in 1919. As Felix the Cat became a valued commodity, Sullivan wanted out of his contract with Paramount and Adolph Zukor. The story of how he had the contract terminated seems more legend than fact. Accordingly, Sullivan, who was a known heavy drinker, went to Zukor's office "supposedly" drunk, demanding release of the Felix contract. Zukor refused, and Sullivan was supposed to have urinated on Zukor's desk. Out of disgust, Zukor threw the contract and Sullivan out of his office. Sullivan had freed Felix from Paramount and he went to Margaret J. Winkler in 1921. All of this seems too calculated for someone who was intoxicated.

The early Felix was very angular, resembling a dog. Margaret Winkler encouraged Sullivan and Messmer to improve the design, and the image of Felix that is best known evolved during the Winkler years. But as Felix's popularity continued to grow, so did the problems with Sullivan. Miss Winkler started looking for another series as a backup to keep Sullivan at bay. This is what motivated her to take a chance on an unknown producer named Walt Disney. Miss Winkler saw Disney's pilot film, Alice's Wonderland, and ordered a series of six Alice Comedies without ever meeting him or seeing his facilities, which at first consisted of nothing more than a wooden one car garage behind his uncle's home in the Los Feliz Village area of Los Angeles. 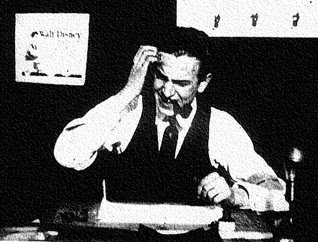 Margaret Winkler urged Disney to develop a feline animated co-star to Alice. Disney resisted at first, but after much insistence upon by Miss Winkler, the character of Julius the Cat, a vague Felix look-alike resulted. It was Miss Winkler's intention to develop this character as ammunition against Sullivan. Accordingly, many of the Alice films were distributed with alternate titles. Instead of Alice's Egg Plant, it would sometimes be sold as Felix's Egg Plant. The mere name of Felix guaranteed bookings regardless of whether it was authentic or not. And while Sullivan was certainly aware of Felix's value, it is not certain that he launched any infringement lawsuits, which he clearly would have been entitled to. However, between 1923 and 1925, the M.J. Winkler Company was a successful distributor of three of the most important animated series in cinema history: Out of the Inkwell, Alice Comedies, and Felix the Cat.

In 1925, Sullivan went to Educational for distribution and remained there until the beginning of the sound era. This seems to be the most prolific era for Felix with a steady flow of imaginative adventures making use of all sorts of surreal imagery and subtle content. After a decade of success, the ironic twist of fate was that the Cat was dethroned by the Mouse with the coming of sound. Sullivan's resistance to sound got him into the game too late, and the few sound releases by Copley Pictures did not sustain Felix in the sound era. This was largely due to the quality of the soundtracks and the look of the cartoons. By 1930, competing studios such as Fleischer, Disney, Terry and Harmon-Ising were licensed for the use of cels, which allowed them to make cartoons with toned backgrounds. The Felix sound cartoons continued to be produced in the silent technique of black ink on white paper. This combined with unimaginative and sometime badly recorded soundtracks brought the end to Felix's screen career. Mickey Mouse continued to advance technically, and once the cat was away, it was the mouse that played.
Posted by BijouBob at 1:36 PM
Email ThisBlogThis!Share to TwitterShare to FacebookShare to Pinterest

Glad to know that someone is keeping track of this. Thanks to Ray a bit of history is being preserved.

Wow, this is great stuff! Glad to have Ray as a friend if he knows this much! Praise God!