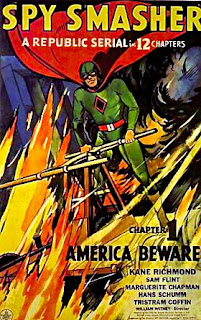 Every once in a while, when researching a Bijou related topic in cyberspace, we run across a website so fascinating and worthy that we are compelled to share it with our readers. Todd Gault’s Serial Experience is just such a site and a joy to browse. Here you will find reviews, articles and comprehensive film descriptions for a vast majority of the movie serials ever made. Since 1999, Todd has featured a “serial of the month” along with a hero, heroine and villain of the month, complete with actor biographies. His stated mission is to introduce a new generation of hobbyists to serial collecting. We asked Todd to share with us how his hobby got started and what he would consider to be the top five serials the studios ever produced - and why. (We had no idea that the original Matinee at the Bijou series played a pivotal role)

”I've been an outsider most of my life, a Doctor Who fan when everyone else was a Trekker. Serials have been a sense of wonder to me since I first caught a weekly showing of Dick Tracy (1937) on a local Saturday afternoon creature feature show called Mad Theater with Superhost out of Lorain, Ohio. The serial, along with a Three Stooges short, was a lead in to two horror films, usually a Universal classic from the thirties or forties followed by a low budget AIP film from the fifties or a Godzilla epic from Toho. I was fascinated and a little frustrated by the whole cliffhanger concept of having to watch week after week to find out what happened, something not always easy to accomplish when your parents want you to turn off the TV and go play outside.

As a kid, everybody I knew watched this show and talked about them Monday at school. But then adolescence hit and suddenly I'm Lou Costello in Abbott and Costello Go to Mars (1953) when they land in the middle of Mardi Gras -- I look like I fit in but I don't. Everyone else is catching the latest Jason Voorhees slice and dice flick on cable and I'm off to the side hoping to catch a late night broadcast of The Devil Bat (1940) or The Man They Couldn't Hang (1939), which is not something you can really talk about with someone else in study hall. My parents sure didn't know what to make of a fifteen-year-old in the early eighties who was more interested in Gene Autry than Michael Jackson. 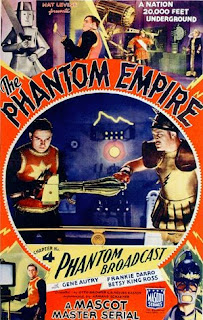 Which is why Matinee at the Bijou was such a comfort for me. The host was someone who seemed to understand my fascination with movies made decades before I was born. I could sit in my room on Sunday nights and not feel embarrassed or self conscious about watching an episode of Phantom Empire (1935) or Zorro's Fighting Legion (1939) followed by Buster Keaton's Parlor, Bedroom, & Bath (1931), Gene Autry's The Big Show (1936), or Lionel Atwill's The Vampire Bat (1933). Listening to the host talk about these films made me feel less of an outsider and more like I belonged, which was important to a lonely, socially awkward and chubby teen with a popular star athlete for an older brother.

Of course things change and people grow up. I went to college where I found other people who shared an interest in older films, though surprisingly not serials. I was still a one man fan club in that area.

Though the Bijou was gone by the nineties, the home video market and an incredibly patient wife made it affordable to collect serials. Being a computer techie, she eventually suggested and helped me build a fan site for serials, so that I could talk about my favorites. Here, in ascending order are my top five favorite serials of all time:

5) The Purple Monster Strikes (1945) A truly groundbreaking serial about a Martian invader played by perennial bad guy Roy Barcroft who lands on Earth, kills and takes over the body of a noted scientist and hires gangsters to help lay the groundwork for an invasion. One of the first alien invaders from outer space films, it paved the way for the sci-fi horror films of the fifties. It is an action packed extravaganza with more cliffhangers fashioned around cars than any other. One even involves having a car dropped on hero Dennis Moore during a fight in a garage. 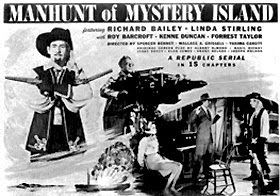 4) Manhunt of Mystery Island (1945) A great mystery serial with Roy Barcroft playing a supposedly reincarnated pirate, but he is really one of several businessmen trying to use an atomic energy invention to rule the world. He affects his disguise by a machine that physically transforms him into the pirate villain. What sets it apart from most serials is that heroine Linda Stirling often rescues hero Richard Bailey from the cliffhangers instead of the vice versa norm.

3) Phantom Empire (1935) A serial that has to be seen to be believed. Singing cowboy Gene Autry, in his first staring role sets two B-Western precedents by one, playing himself, and two, making a musical western. Gene is a radio broadcaster who has to contend with being framed for murder by scientists who want the radium rich land his ranch is on, while avoiding death from the underground futuristic society that doesn't want surface dwellers discovering the entrance to their subterranean world. You haven't lived till you see Gene Autry sword fight a robot in the only sci-fi/ musical western ever made. 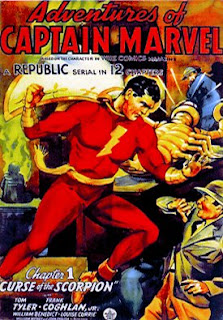 2) The Adventures of Captain Marvel (1941) To quote the tag line from Richard Donner's Superman (1978), "You will believe a man can fly." One of the first and best superhero serials, with special effect flying sequences that put to shame some of the vaunted CGI work of today. Tom Tyler gives a dynamic performance as the World's Mightiest Mortal out to track down mystery villain The Scorpion in his quest for an ancient statue that can turn base metals into gold and produce an atom smashing death ray. Tyler isn't that happy-go-lucky Big Red Cheese from the comic book, but a serious adversary of evil who throws henchmen into walls and through doors and even tosses an engine block at one when he stupidly tries to drop it on Captain Marvel.

1) Spy Smasher (1942) Arguably the best serial ever made. Kane Richmond does a phenomenal job playing twin brothers, each with a distinct and different personality, trying to track down Nazi spy master The Mask and put a stop to his stateside sabotage of Allied defenses. Non-stop action filled with fist fights, shoot outs, car chases and more exploding buildings than you can shake a stick at, plus the plot moves along in a more linear fashion than usual for a serial. Where the villain often decides on a scheme and the hero prevents it over and over through the course of twelve to fifteen episodes, here the hero methodically works his way through the villain's organization, dismantling it as he goes along.

And it all started with Matinee at the Bijou getting me interested in serials. Ironically, if not for serials I would never have graduated from college, but that's another story. What? You didn't think I was going to leave you with a cliffhanger? What else would a serial fan do?”
Posted by BijouBob at 9:14 PM
Email ThisBlogThis!Share to TwitterShare to FacebookShare to Pinterest

I love Matinee at the Bijou, but I can barely read your site! What is that, sepia type on a black background?

PLEASE switch to a more readable color scheme! I don't think that you're winning your site any new fans by making it nearly impossible to read. If it gives a 49 year old like me headaches, I would imagine a lot of seniors would love your site--if they could read it!