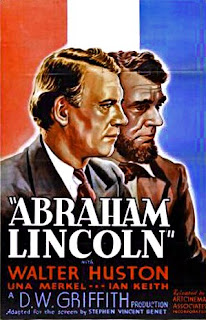 Our heartiest congratulations go out to president-elect Barack Obama! If the past is any indication, it won't be long before our 44th president will be portrayed in feature films and documentaries. Real-life and fictional cinematic interpretations of the American presidency have been featured on film since the birth of the movies.

Of course, Barack Obama won't be the first president from Illinois to be given the silver-screen treatment. Abraham Lincoln has reportedly been reflected on film over 100 times, according to cinema studies graduate and Blogger Chas Andrews. In 1930, filmmaker D.W. Griffith's first talkie was Abraham Lincoln, as portrayed by Walter Huston. This was one of only two sound films directed by Griffith, as it was made at the end of his filmmaking career. Griffith had previously filmed Lincoln's assassination at Ford's Theater in his controversial Birth of a Nation (1915). 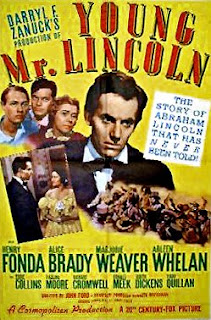 Other notable screen portrayals of Honest Abe followed. In 1939, John Ford directed Henry Fonda in Young Mr. Lincoln, a pre-POTUS fictionalized account of Lincoln's loves and his transition from Illinois lawyer into the world of politics. In 1940, John Cromwell directed Raymond Massey and a stellar cast in RKO's Abe Lincoln in Illinois, which was based on the Pulitzer Prize winning play by Robert E. Sherwood. Massey deftly captures Lincoln's early years beginning in 1831 and ending 30 years later with his train ride leading to Washington, D.C. Massey shines in a role he originated on the Broadway stage. America's 16th president was even featured in Chapter One of The Lone Ranger, a 1938 cliff-hanging Republic serial.

Alexander Hamilton, America's first Secretary of the Treasury, is at the center of the politically charged Alexander Hamilton (1931). George Arliss portrays Hamilton, attempting to establish America's first national bank, and the cast abounds with political figures of the day including then President George Washington (Alan Mowbray) and future presidents Thomas Jefferson and James Monroe.

In 1933, Universal Pictures released a feature-length documentary chronicling the achievements of Franklin Delano Roosevelt during his first 100 days in office. In The Fighting President, high production values and a rousing patriotic music soundtrack help underscore the images of FDR's presidential energy and the phenomenal volume of legislation so quickly passed at the outset of his four-term tenure in office. The tagline for the movie is: "America cries out to its fighting president: Show Us the Way and We Will Follow" 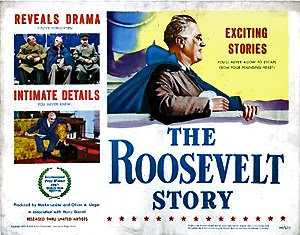 A second feature-length documentary on FDR titled The Roosevelt Story was released by United Artists in 1947. Actor Ed Begley and four other voices narrated the story of the public and semi-private life of FDR. Primarily comprised of newsreel footage, the film focuses on the many federal agencies created by the FDR administration during the depression and his subsequent accomplishments as a wartime leader. One of the most distinguished FDR biographies is Sunrise at Campobello (1960), with Ralph Bellamy's rich portrayal of FDR.

FDR, who was fond of mystery novels, inspired a best-selling book and feature film at a White House luncheon in 1935 when he suggested the premise for a mystery: How could a rich man alter his identity, disappear, and still take his money with him? A half dozen distinguished writers pooled their imaginations and came up with The President's Mystery. In 1936, the success of the novel inspired Republic Pictures to make a nifty little B-movie adaptation with the same title. For his part, FDR received a screen credit and mention at the beginning of the film. 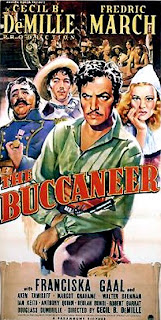 Andrew Jackson has long been a favorite subject of filmmakers. In 1938, Cecil B. DeMille gave us the first screen adaptation of Lyle Saxon's novel "Lafitte, the Pirate," which was translated into a silver screen epic called The Buccaneer. Set during the War of 1812, DeMille's lavish production tells the Hollywood version of how General Andrew Jackson (Hugh Sothern) recruited pirate Jean Lafitte (Fredric March) to side with the U.S. when the British attacked New Orleans. DeMille cast his new son-in-law, a young actor named Anthony Quinn, in the picture.

In 1958, Paramount remade The Buccaneer, this time with Charlton Heston as Jackson and Yul Brynner as Lafitte. DeMille was set to direct, but took ill and in his place son-in-law Anthony Quinn replaced him in the director's chair. It was the only film Quinn ever directed, and DeMille's hand is evident in spite of his limited participation in the outcome. 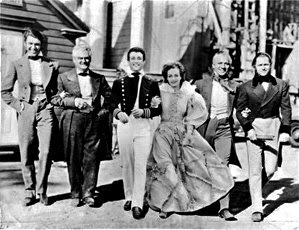 Lionel Barrymore gave us two interpretations of Andrew Jackson, first in The Gorgeous Hussy (1936), a romanticized drama with an underlying plot concerning how much power should be granted to the individual states. The fun in this one is watching Barrymore ham it up with hussy Joan Crawford and a galaxy of MGM Hollywood stars, including Robert Taylor, Franchot Tone, Melvin Douglas, James Stewart and Beulah Bondi as Jackson's faithful wife Rachel.

Controversial writer Dalton Trumbo wrote the story and screenplay for a 1942 presidential fantasy-comedy called The Remarkable Andrew. In this Paramount production, Brian Donlevy plays the spirit of Andrew Jackson, summoned by the film's Jackson-obsessed protagonist (William Holden) to rescue him from a false accusation. To assist him, the spirited Andrew Jackson recruits the ghosts of George Washington, Thomas Jefferson and Benjamin Franklin. 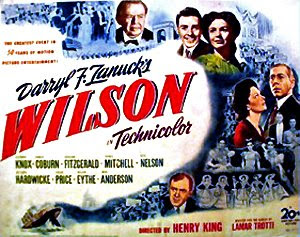 Adjusted for inflation, one of the most expensive movies ever made was the 1944 20th Century Fox production of Wilson, an opulent all-star chronicle of the political career of President Woodrow Wilson, as portrayed by Alexander Knox. President Calvin Coolidge (Ian Wolfe) is a key player in Otto Preminger's The Court-Martial of Billy Mitchell (1955), a political drama based on a true story, featuring Gary Cooper in the title role.

All of these American films are only the first wave in a sea of classic cinematic chestnuts that portray the American presidency. Clearly the motion picture as an art form has come a long way since D.W. Griffith's Abraham Lincoln was released in 1930.

Today's presidential portrayals more often reflect the cynical and turbulent times in which we live. Among the latest examples are Oliver Stone's W - an enigmatic cinematic take on George W. Bush, and director Ron Howard's anxiously awaited Frost/Nixon, the screen adaptation of the Tony Award-winning play, adapted by the playwright Peter Morgan, and starring Frank Langella and Michael Sheen expanding their triumphant theatrical portrayals of Richard Nixon and David Frost. Here is the official trailer:


Posted by BijouBob at 5:08 PM
Email ThisBlogThis!Share to TwitterShare to FacebookShare to Pinterest