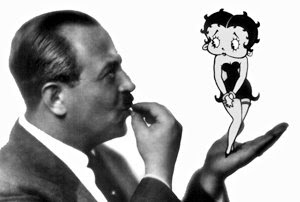 While Max Fleischer is best known for his Betty Boop, Popeye and Superman cartoons, few realize his role as an artist in the creation of innovative industrial, technical and scientific films. We asked our colleague Ray Pointer to tell us more about Fleischer as an artist in his own right.

Max Fleischer always claimed that his career as an artist began when he first stood up in his crib and scrawled on the wallpaper. While born in Austria, he was four years old when he, his older brother Charles, and his parents arrived in New York harbor in 1887. His first glimpse of America was The Statue of Liberty, which made such an indelible impression, that he came to see the fields of engineering and mechanics as the "art form of the 20th Century." 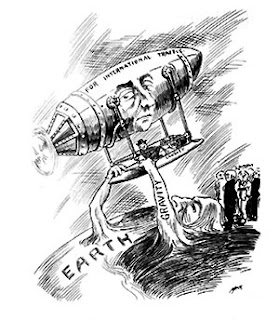 It was said that Max had a natural ability to understand vague or complicated concepts and translate them into drawings that communicated clearly. During his early school years he would draw maps for his class that taught geography better than those published in the text books. He continued his interest in drawing, and after graduating from Public School, he took formal instruction at The Art Student's League and Cooper Union.

Before entering the animation field, Max Fleischer was a cartoonist for The Brooklyn Daily Union in the early 1900s. He had admired newspaper cartoons as a youth, and after working as an errand boy at $2.00 per week he eventually attained the position of staff cartoonist while still in his teens, becoming the youngest cartoonist in the nation. He later became a successful Photoengraver, Airbrush Artist, Technical Illustrator, and eventually, Art Editor for Popular Science Magazine. But it was not until 1914 that Fleischer ventured into the realm of animated cartoons. 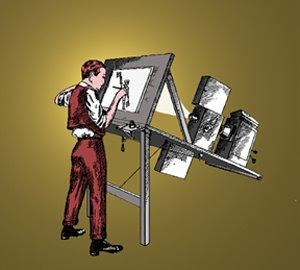 Fleischer's boss, Waldemar Klaempffert, had seen some of the first commercially produced animated cartoons which were jerky and lifeless. Knowing Max's knowledge of art, photography and mechanics, Klaempffert suggested that Max consider a means of making animated cartoons look better. The result, of course was The Rotoscope, which was the device that launched Max Fleischer's landmark 1920s series, "Out of the Inkwell."

Fleischer's role as the on screen artist in "Out of the Inkwell" served as a semi-documentary of the man as an established artist. This is particularly so since the early entries display art and animation by Fleischer and his long time associate, Roland "Doc" Crandall. As his studio grew and acquired additional staff, Fleischer continued to contribute his talents well into the 1930s, working on certain technical and special effects animation required of his theatrical cartoons for Paramount. 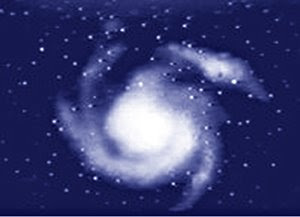 While Fleischer's animated works are best known through his various entertainment series, his studio engaged in several important scientific and industrial films. In 1923, Fleischer produced The Einstein Theory of Relativity in association with Dr. Garret P. Serviss and Dr. Albert Einstein, followed by Evolution for the Museum of Natural History. Because Evolution was based on the controversial Darwin's Theory, it was screened as part of the famous Scopes Trial led by William Jennings Bryan and defended by Clarence Darrow.

Fleischer made a number of technical and industrial films throughout his career. One of the earliest known to survive is The Electric Bell (1916). During World War I, he produced the first training films for the U.S. Army on subjects such as Contour Map Reading, and Firing a Stokes Mortar, Operating the Lewis Machine Gun, and Submarine Mine Laying. After the war, Fleischer made various industrial/commercial films for AT&T such as How the Telephone Talks (1924), That Little Big Fellow (1926?), and Now You're Talking (1927), which has been recently restored by The Library of Congress and The National Film Preservation Foundation. 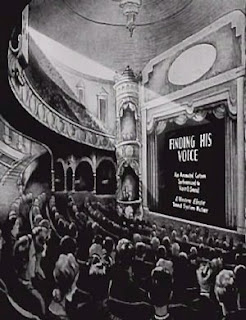 But the most famous of these is Finding His Voice (1929), which was produced for Western Electric's Electrical Research Products Incorporated division. This short was made to explain the Variable Density sound-on-film recording and reproduction process for theater owners, projectionists, and recording engineers. It was done largely by the hand of Fleischer and his best friend, Frank Lyle Goldman, assisted by Fleischer staffers including Al Eugster. Fleischer produced other sponsored industrials such as A Jolt for General Germ for Lysol, Suited to a Tea for the India Tea Company, Step on It and Tex in 1999 for Texaco, and In My Merry Oldsmobile for General Motors' Olds Division, all from 1931 alone.

With the approach of World War II, Fleischer became less interested in producing animated comedy films. With his theatrical cartoon studio under the control of Paramount, Fleischer turned towards his main interest, film as an educational tool. During the 1940s, he was head of the Animation Department at the Jam Handy Organization in Detroit, Michigan, where he supervised important productions for military training and industrial promotion. Many times he lent his hand to the actual art work that was used, and the film News Sketches by Max Fleischer is typical of Fleischer's flair for clever writing and attractive illustration. This example clearly displays the inking style of "Out of the Inkwell" and further establishes Fleischer's artistic skill, which has never really been fully realized. 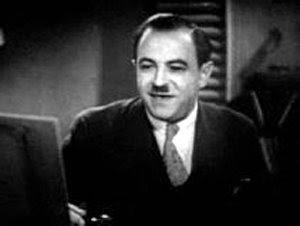 This is one of the major differences in the inevitable comparisons between the works of Walt Disney and Max Fleischer. While both men achieved great things within their own right, it is clear that Fleischer was a far more accomplished artist. Examples of Disney's early artwork and animation display a primitive drawing ability, something he came to realize with his drive to reach his own artistic goals. The result of his success was achieved through the direction and skill of others, while Fleischer was clearly an accomplished artist in the truest sense. This is the distinction that led to his becoming eclipsed by the light of the Disney achievements, which were the result of aggressive business practices that Fleischer, having an artist's mentality, failed to realize.

News Sketches by Max Fleischer represents his work of the mid 1940s, and is an important discovery since the only widely seen example from his Jam Handy period has been Rudolph the Red-Nosed Reindeer. Thanks to Rick Prelinger and Prelinger Archives, this period of Max Fleischer's career has been saved for future generations to discover and gain further insight to the man whose name is known only from the top of 1930s title cards.

Great thanks, Ray! You can learn more about the world of Max Fleischer and other animation pioneers by visiting Ray Pointer's Inkwell Images website. You can also read our earlier Bijou interviews with Ray here and here.

Posted by BijouBob at 10:10 PM
Email ThisBlogThis!Share to TwitterShare to FacebookShare to Pinterest

Thank you for a brilliant blog. I'll be reading every post - oh and I've embedded one of your video clips from you tube on my blog.

Amiable dispatch and this mail helped me alot in my college assignement. Thanks you seeking your information.