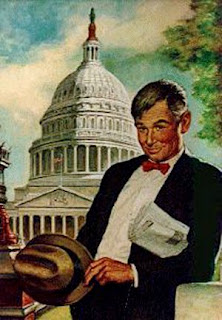 Abraham Lincoln isn't the only iconic American political figure whose life journey in many ways parallels that of our freshly elected President Barack Obama.

Will Rogers entered life as part Cherokee Indian in 1879 Indian Territory, 25 miles NW from what is now Tulsa, Oklahoma. His father, Clement Rogers, was a rancher, a judge and a five-term Cherokee Democratic Senator. Young Rogers often quipped "My ancestors may not have come over on the Mayflower, but they met 'em at the boat." His mother died when he was only 11 years old.

Young Rogers yearned to be a cowboy and developed skills as a horseman and lariat artist (his rope tricks later got him into the Guinness Book of World Records). By the time he turned 21, at the turn of the 20th century, his thirst for knowledge and adventure had taken him to Argentina, where he learned the livestock trade while transporting pack animals from Buenos Aires to South Africa for use in the Boer War.

While in Johannesburg, Rogers joined Texas Jack's Wild West Show as "The Cherokee Kid" and went on to perform his act in Australia and New Zealand with the Wirth Brothers Circus. He had a natural stage presence, and upon returning to the states, continued performing in Vaudeville circuits from 1905 to 1915 in America, Canada and Europe. In 1915, these experiences culminated in a decade-long starring role on Broadway in the famous Ziegfeld Follies. Gradually Rogers embedded humorous commentary and homespun philosophy into his lasso routines to the increasing delight of audiences. Wry one-liners like "When the Okies left Oklahoma and moved to California, it raised the I.Q. of both states" and "Make crime pay - become a lawyer" endeared him to audiences. 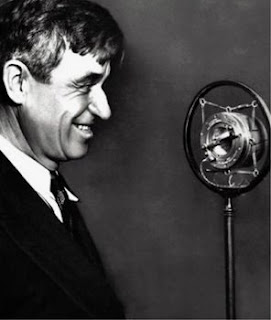 His growing popularity rapidly propelled Will Rogers into simultaneous careers as an author, journalist, radio star and world famous Movie Star. But it was his keen understanding of politics combined with the opportunity to personally impact humanity that became his driving passion in life: "Live your life so that whenever you lose, you're ahead." His radio career began in 1922, and by 1930 he appeared regularly for the pharmaceutical firm E.R. Squibb & Sons and was regarded as one of the nation's primary molders of public opinion. Also in 1922, Rogers began writing a nationally syndicated newspaper column for the New York Times, criticizing dishonest politicians and the political influence of big business. The Saturday Evening Post subsequently hired him to serve as a goodwill ambassador-at-large, writing dispatches from Europe and the Soviet Union. 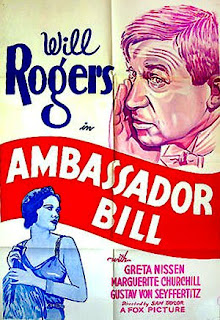 Will Rogers began flirting with the movie industry as early as 1916, when he was hired to write a screenplay. This resulted in starring roles in 71 motion pictures (sadly, most of them lost forever). One of his earliest sound films, released in 1931, was Ambassador Bill, which humorously paralleled his own life. In the film, Will stars as Bill Harper, an American ambassador to the revolutionary-ravaged fictional country of Sylvania. Bill is sent to replace the current ambassador who has experienced a nervous breakdown. The corrupt prime minister of Sylvania is attempting to steal power from the queen, until Ambassador Bill arrives to spread good humor and deliver a happy ending.

The stock market crash of 1929 and the resulting Great Depression had a profound impact on Will Rogers and his determination to make a difference in the lives of his fellow citizens. His voice was a reassurance to a demoralized population that they were not alone in their distrust of corrupt politicians and the greedy elite. Hundreds of quotes attributed to him during his career attest to his humanitarian nature and power of political persuasion. Here are a few timely examples:

"Diplomacy is the art of saying "nice doggie" until you can find a rock."

"We'll hold the distinction of being the only nation in the history of the world that ever went to the poor house in an automobile."
"We will never have true civilization until we have learned to recognize the rights of others."
"You can't say that civilization don't advance, however, for in every war they kill you in a new way."
"I am not a member of any organized political party, I am a Democrat."
"There is no trick to being a humorist with the whole government working for you."
"I don't make jokes, I just watch the government and report the facts."
"If we ever pass out as a great nation we ought to put on our tombstone, 'America died from a delusion that she has moral leadership."
"I love a dog, he does nothing for political reasons." 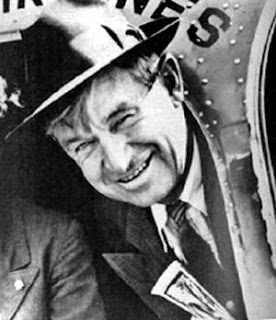 Will Rogers died in a plane crash in Alaska in August 1935, along with pioneer aviator Wiley Post, while testing the feasibility of flying freight from the U.S. to Asia.
The following was posted in The Oklahoma Gazette: "Many called him the future president of the United States. When he died, a squadron of airplanes dropped flowers over those attending the funeral services at Claremore airport and people scattered to gather the fallen blossoms. In Washington, D.C., Congress adjourned while the grief-stricken family received a well-publicized letter from President Franklin Delano Roosevelt. California’s governor ordered a day of mourning as flags flew at half-staff in Los Angeles County. An estimated 100,000 reportedly paid their respects at Forest Lawn cemetery. Church bells tolled in 100 cities nationwide in remembrance. For two silent minutes, more than 12,000 theaters darkened across the country and all Hollywood studios stopped production."

When asked to reflect on his career, Will Rogers would respond in his inimitable drawl: "Had there been no Ziegfeld and no Follies, I would today have been 12 miles north of Claremore, Oklahoma, plowing for corn, slopping the hogs, running my own still and knocking the Republican Party, for that is considered one of the chores in my country ... "
In our next post, we'll look at some of the wonderful films made by Will Rogers at the peak of his career. Meanwhile, click here to enjoy Man of the Year, a rare 30-min 1956 TV kinescope produced by WRCA TV in association with The Saturday Review - and brought to you courtesy of the Internet Archive.
Posted by BijouBob at 5:34 PM
Email ThisBlogThis!Share to TwitterShare to FacebookShare to Pinterest