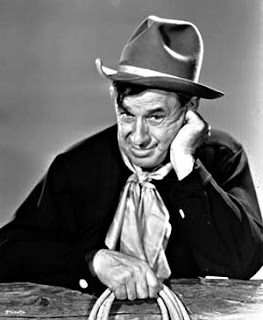 Clearly we have a dysfunctional education system in America when the spirit and memory of Will Rogers are left in the dust during the historic Obama inaugural celebrations. It can be argued remembrances of Rogers should have shared the stage with fellow national icons Abraham Lincoln, FDR and Dr. Martin Luther King, all of whom contributed abundantly to America's history, politics and popular culture.

Today we pay homage to the film legacy of Will Rogers. He was brilliant at teaching common sense to the common man during the Roaring Twenties and Great Depression; a populist who manipulated the media to educate his fellow citizens about what the Washington politicians were up to - and what the barons of Wall Street were doing to Main Street. Sound familiar? So popular and influential was Rogers prior to his untimely death in 1935, that many encouraged him to run for governor, senator and even the presidency.


James H. Billington, Librarian of Congress, has observed that "Our film heritage is America's living past." This precisely epitomizes the film legacy of Will Rogers. From 1918 to 1935 he starred in 71 motion pictures. In 1934, near the peak of his career, Rogers was the number one box office star in America, eclipsing the likes of Clark Gable, Joan Crawford, Shirley Temple, Wallace Beery, Mae West and Bing Crosby. His success on the big screen paralleled his many achievements as a superstar of radio, the Broadway stage, personal appearances and his ubiquitous social and political commentaries in books, magazines, newspapers and lectures.


Will Rogers film career began in 1916 when he signed with Paramount to write intertitles for a silent movie called Roaring Camp, starring L. Frank Baum. This led to his screen debut for Sam Goldwyn in Laughing Bill Hyde (1918). Rogers starred in a total of 50 silent films, many for which he also wrote the intertitles in his inimitable conversational style. 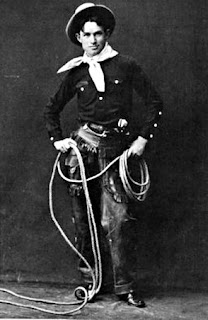 In Ropin' Fool (1922) Rogers plays Ropes Reilly, a cowboy who ropes anything that moves until a lynch mob decides to use Reilly's rope for a hanging party, with Reilly as the guest of honor. Motion Picture World wrote: "Plentiful use of slow motion photography shows how it is done and dispels any possible belief that the stunts are faked. No audience can help but marvel as Rogers throws a figure eight around a galloping horse, or lassoes a rat with a piece of string, or brings to term a cat melodiously inclined." Later Rogers would wryly claim fame as America's "Poet Lariat." You can sample an excerpt from Ropin' Fool here.

Rogers starred in many silent films for the legendary Hal Roach. Among them is a series of 3 topical and timeless political satires revolving around a character called Alfalfa Doolittle (Rogers). The titles are Going to Congress, Our Congressman and A Truthful Liar. The first one was featured at the 1924 Republican National Convention in Cleveland and the Democratic National Convention in New York City. Rogers attended both conventions wearing his many hats as radio commentator, newspaper columnist and journalist. 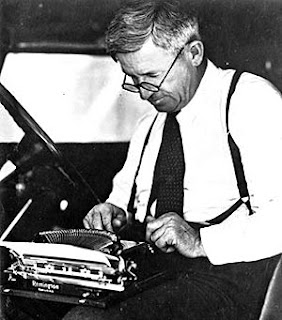 During 1926, Rogers traveled the world on behalf of The Saturday Evening Post, as WILL ROGERS: "Unofficial Ambassador of the United States to Europe." He filed dispatches for the print media and also filmed a series of travelogues. The Tulsa Daily World wrote: "Although Rogers has had years of experience as an actor in motion pictures, he has broken away from all film traditions in photographing his own tour, and has produced 12 reels of highly original and personally planned pictures, doing, for once, all his own directing, acting, and writing of subtitles." The series of 12 travelogues were released during 1927-28 with titles like "Winging Around Europe with Will Rogers" and "Through Switzerland and Bavaria with Will Rogers." Tragically, this entire series has long been presumed lost.


When the movies learned to talk, many former screen stars were unable to make the transition. Either they couldn't adjust from an exaggerated acting style suited to silent film acting, or their voices didn't resonate with audiences. Will Rogers made the transition flawlessly, in part because he talked the way he behaved on screen, and in the same rural conversational style as expressed in the title cards (most of which he wrote). Also, audiences were familiar with his voice from his abundant radio and stage work.


In A Connecticut Yankee (1931) Will Rogers interprets Mark Twain's character from A Connecticut Yankee at King Arthur's Court. The New York Times wrote approvingly: "Will Rogers suits the title role of the film ... so well that when one picks up the book one instantly visualizes this recruit from the saddle and the plains." Photoplay named Rogers "Actor of the Month" in honor of his performance. Director David Butler made this and four other pictures with Rogers between 1932 and 1935: Business and Pleasure, Down to Earth, Handy Andy and Doubting Thomas.


Henry King directed Will Rogers In the first screen version of State Fair (1933). Again the New York Times raved about Rogers work, and Photoplay once again cited him as "Performer of the Month." The film was nominated for an Academy Award as Best Picture. 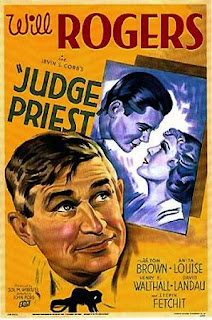 Among his finest cinematic achievements were three films directed by the great John Ford; Doctor Bull (1933), Judge Priest (1934) and Steamboat Round the Bend (1935). In Doctor Bull, more drama than comedy, Rogers plays an old-fashioned country doctor underappreciated by the rural community.
Rogers had powerful personal opinions about health care in America at the time: "There is nothing that keeps poor people poor as much as paying doctor bills. All doctors should make enough out of those who are well able to pay to be able to do all work for the poor free. One thing that a poor person should never be expected to pay for is medical attention and not from an organized charity but from our best doctors. Your doctor bill should be paid like your income tax, according to what you have."


Director John Ford once called Judge Priest, "My favorite picture of all time." The New York Times had this to say about the film after its exclusive premiere at Radio City Music Hall: "The photoplay which Fox has assembled around Dr. Will Rogers, the eminent newspaper columnist, presents the cowboy Nietzsche in one of the happiest roles of his screen career ... and let it remind you that Will Rogers, although he bears the burdens of the nation on his shoulders, continues to be a remarkably heart-warming personality." Of course, off screen, Rogers had very strong opinions on the American legal system, often quipping: "Personally I don't think you can make a lawyer honest by an act of the Legislature. You've got to work on his conscience. And his lack of a conscience is what makes him a lawyer."


Unfortunately, Judge Priest and some of Rogers other classic films suffer today from racial stereotypes and racial humor, making them offensive to many modern viewers. Nonetheless, they do represent rural life in America during the 1930s. You can watch Judge Priest in its entirety here, courtesy of the Internet Archives. 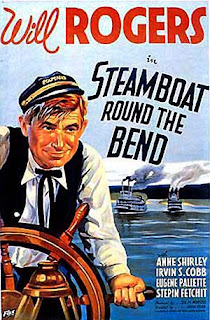 Steamboat Round the Bend was released to a mourning nation and critical acclaim in September 1935, three weeks after Rogers death on August 15th. When filming was completed, he had taken off on his ill-fated Alaskan expedition with pioneer aviator Wiley Post.


The final scene originally written to conclude the picture was cut prior to the films release. The scene showed Will Rogers waving to Captain Eli as his boat faded out of the picture. The scene cut was a close-up of Will waving farewell, and the studio feared the audience would leave the theater crying as if he were waving to them.
You can watch the original trailer for Steamboat Round the Bend here. 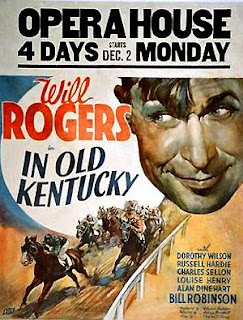 In Old Kentucky (1935), directed by George Marshal, was Will Rogers' final film and was released in November, three months following his death. The Literary Digest had this to say: "The same absence of morbidity which made audience reaction to Steamboat Round the Bend so remarkable, when that picture was shown soon after his death early this fall, is apparent now. Audiences in the West and New England are flocking to the film and reacting to it much as though the comedian were still alive."


In addition to feature films, Will Rogers would frequently be caricatured in cartoons and occasionally appeared as himself in short subjects and newsreels. For example, he often lent his voice and talent in support of FDR's struggle to overcome the depression. Here is Will Rogers in a 1933 newsreel urging citizens to get behind FDR's New Deal programs designed to cure the depression: "The NRA system has got to work, or else - or else there ain't gonna be nothin' if it don't work." Sound familiar? FDR credited Rogers with bringing his fellow Americans "back to a sense of proportion." In the WB Merrie Melodies cartoon I Love Mountain Music (1933) a caricatured Will Rogers quips: "Well folks, all I know is what I read in the papers."


You can learn more about Will Rogers' remarkable career and contributions to American history and culture by visiting the Will Rogers Memorial Museums - and you can purchase many of his films here.


And here you can enjoy one of Will Rogers' most original and amusing silent short subjects Big Moments From Little Pictures (1923). Rogers impersonates famous stars in famous films, including Rudolph Valentino in Blood and Sand, Douglas Fairbanks in Robin Hood, and Ford Sterling and his Keystone Kops. At the end of part one, click here to enjoy part two.
Posted by BijouBob at 5:10 PM
Email ThisBlogThis!Share to TwitterShare to FacebookShare to Pinterest

Will Rogers was going to caricatured in Disney's "Mickey Polo Team" as a refering to the Walt's friendship to him as they played polo one time. However, after Will's tragic death, the cartoon was hold back till a year later and Will was replaced by Charile Chaplin in the final film.

I've seen many clips of Mr. Rogers, errrrrrrr.....Will Rogers, but never one of his films.

Good post and this fill someone in on helped me alot in my college assignement. Gratefulness you as your information.

Will Rogers is really one of the best actor of hollywood history that been a trademark of his good acting and the killer smile he have. i hope i can watch some of his great classic movies.